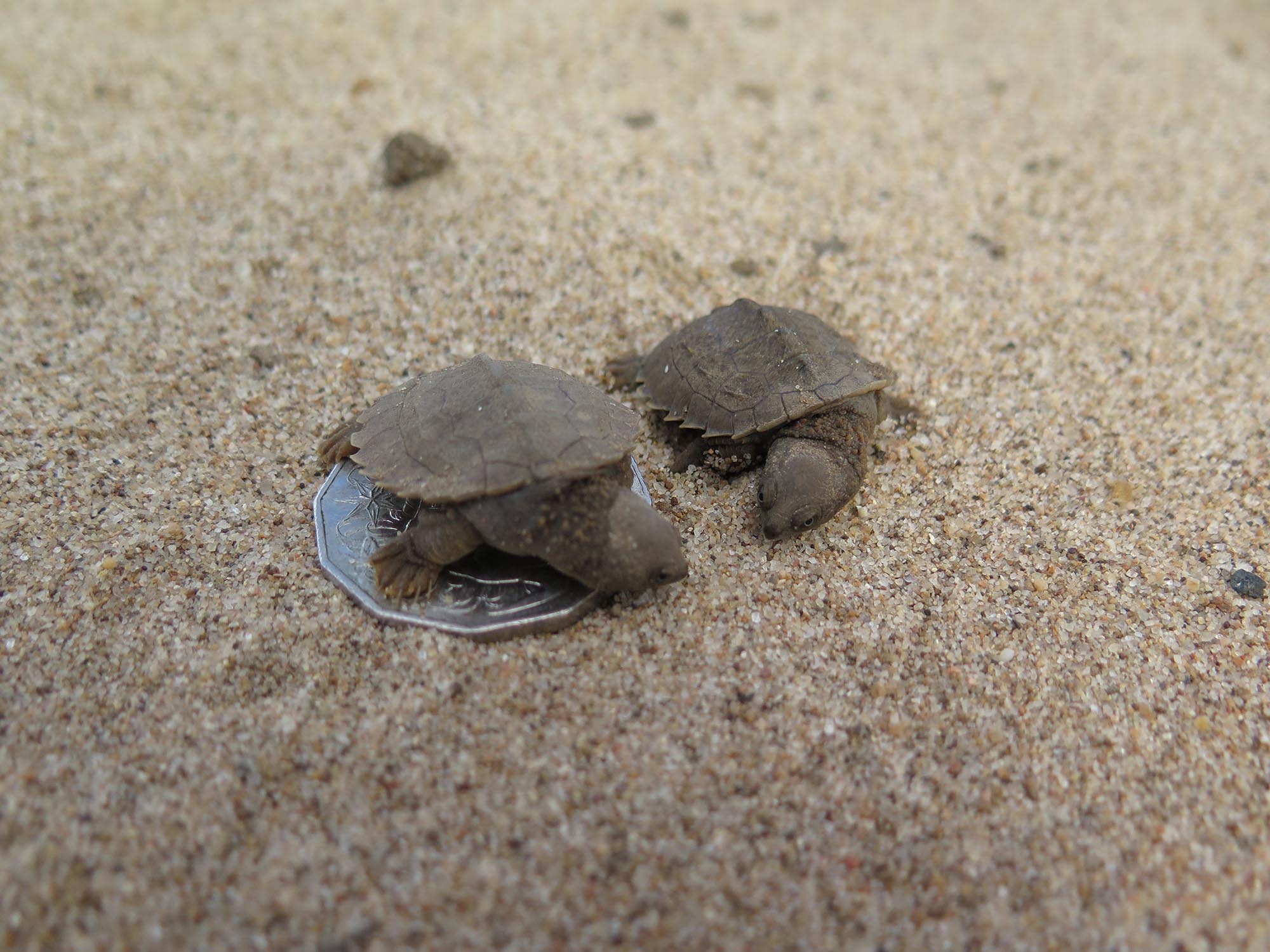 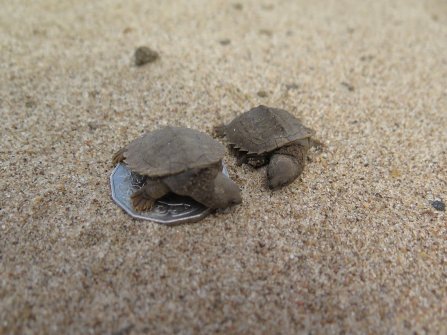 When you’re tucked up safe in bed tonight spare a thought for a local threatened species, the Fitzroy River Turtle (Rheodytes leukops) whose nests are currently the subject of a local protection program, due to its listing as vulnerable by both the Queensland and Australian Governments.
Fitzroy Basin Association Inc. (FBA) and Greening Australia are working in partnership through funding from the Australian Government’s National Landcare Programme and Australia Pacific LNG to protect the nests of this small and unique species during the 2015 breeding season, which runs from August to January.
FBA Senior Project Officer Cassandra Bouna said the organisations are proud of the achievements to date, having protected more nests for the first half of the 2015 breeding season, than in the full 2014 season.
“In 2014, we monitored and protected 37 Fitzroy River Turtle nests, and with only two weeks to go of the 15 week nest protection program we have already protected 80 turtle nests from predators,” Ms Bouna said.
“The Fitzroy River Turtle nests on shallow sandy or loamy riverbanks along the Fitzroy River upstream of Rockhampton city and can lay 16-20 eggs at a time, with a maximum of two clutches laid during a season per breeding turtle,” she said.
“Eggs are incubated for 46 days so it is a significant task to find, monitor and protect numerous nests at different sites along the Fitzroy River.”
Discovered in 1980, the adult Fitzroy River Turtle can grow up to 25 centimetres and has the unique feature of breathing through an opening in its bottom, called a cloaca, as well as through its lungs.
Greening Australia’s Field Officer Kymberly Robinson said the threats for turtle eggs during breeding season were water rats, foxes, pigs, goannas, feral cats and dogs, but also destruction of the nests by cattle and humans active along river banks, and poor water quality.
“Once we find the nest, we use mesh to protect the nest sites, which stops predators from digging up the nests, while allowing the hatchlings to scramble through when they are born,” Ms Robinson said.
The project is delivered by Greening Australia and is supported by Fitzroy Basin Association Inc. through funding from the Australian Government’s National Landcare Programme and Australia Pacific LNG.
On behalf of Australia Pacific LNG, Natasha Patterson, Origin General Manager Approvals, Land and Community, said the nest protection program was a strong example of the positive outcomes that result from such partnerships.
“The success of this conservation program demonstrates that partnering with FBA and Greening Australia has delivered outstanding results for this vulnerable species, and thanks to their great work, the Fitzroy River Turtle now has a more secure future.” Ms Patterson said.
To learn more about the Fitzroy River Turtle visit FBA’s FLOW Visitor Centre, old post office building, corner of East and Denham Streets, Rockhampton or click here.