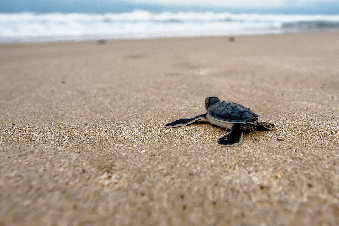 Marine turtles have roamed the oceans and beaches for over 150 million years. Over this time, they have shared time and space with many different creatures including dinosaurs, however, now they face far bigger threats and need your help.

Struggling to survive, all seven species of the world’s marine turtles are classified as either vulnerable to extinction or endangered. There are many ways that people can help sea turtles, but central Queenslanders (especially those who frequent the beach) have a bigger role to play.
Central Queensland is home to four of the world’s seven species of marine turtles, and November marks the start of their nesting season. Starting now until early next year, turtles will be slowly but surely emerging out of the ocean and onto our doorsteps. To help the next generation of turtles survive this year’s nesting season here is how you can help.

Report any sightings
If you spy a turtle, turtle tracks or a nest report it to us. We work hard to monitor and protect special places and animals in the Fitzroy region including marine turtles. Last nesting season, we in conjunction with Team Turtle CQ volunteers protected 22 nests and hope to look after even more this year.