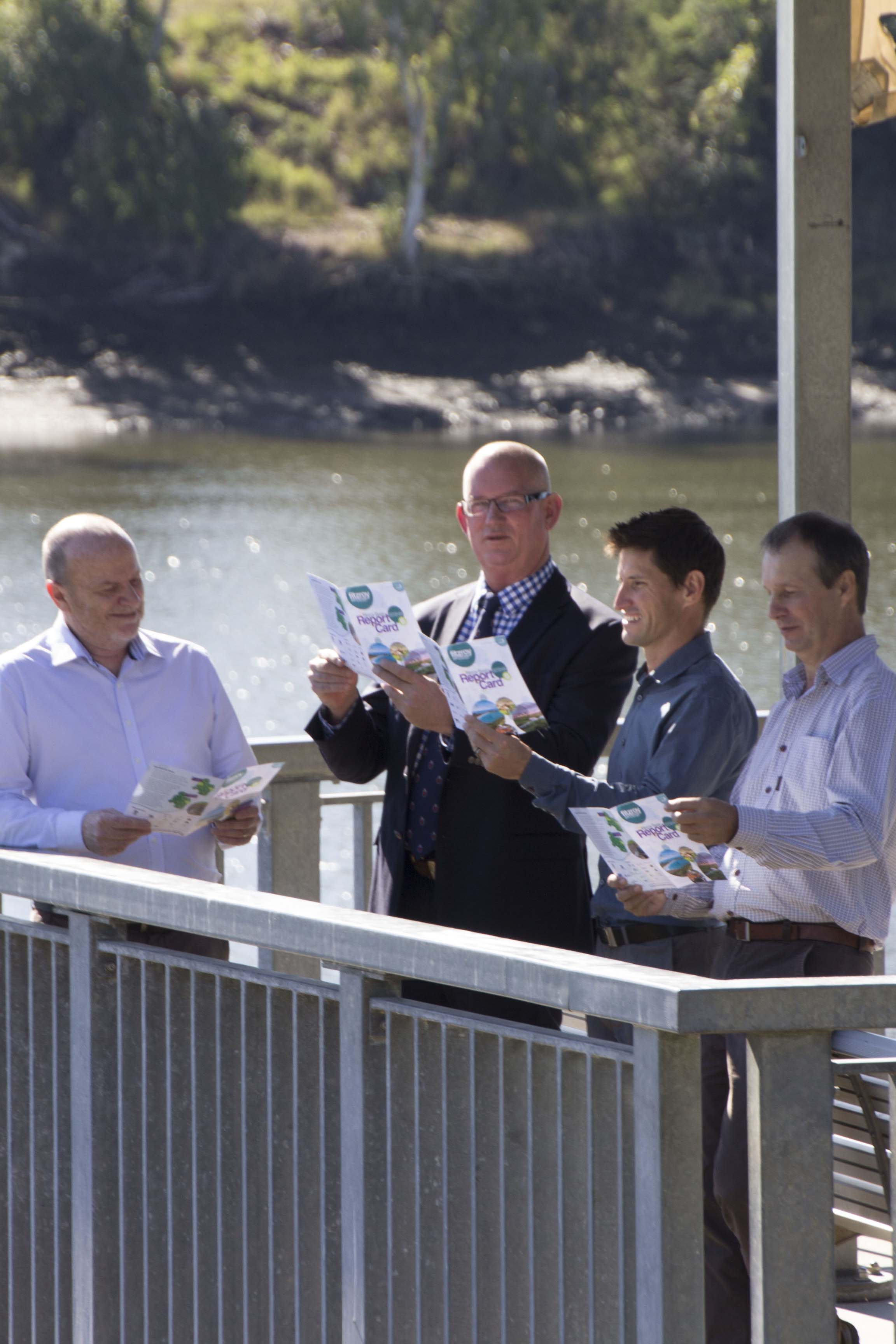 The Fitzroy Partnership for River Health today released its 2013-14 report card on the state of waterways in the Fitzroy Basin and launched a new Agricultural Use Report that grades water quality in local waterways for stock and crop production.

The Fitzroy Basin Association is proud to be a Major Partner of the Fitzroy Partnership for River Health, and has been since the Partnership commenced in 2012.
The agricultural industry is the largest land use in the Basin and also a major consumer of the basin’s water assets, so reporting on the suitability of water for stock and cropping use represented a logical extension to the Partnership’s existing ecosystem health and drinking water assessments.
According to Fitzroy Partnership for River Health Executive Officer Nathan Johnston, the agricultural industry should be satisfied that catchments were generally found to be excellent or good for agricultural use.
“A significant water quality dataset is already compiled annually to prepare existing aquatic ecosystem health reports for surface waters and now these results have also been compared against Stock and Cropping thresholds to prepare reports for Agriculture,” Mr Johnston said.
“All freshwater catchments were awarded A grades for both Stock and Cropping use except for Callide for Cropping use, and Callide and Theresa for Stock use, which were awarded B grades, due to minor issues for a couple of indicators” Mr Johnston said.
The report highlights that good water quality is available for stock and cropping use and contributes to the Fitzroy Basin’s position as one of the most productive cropping and grazing centres in Australia.”
Overall in 2013-14, the Basin attained a B grade for aquatic ecosystem health, which includes the freshwater and estuary reporting areas. This was up from previous years’ C grade, however the marine zone was not included in calculating the overall basin grade this year because results for the marine zone were unavailable.
“While attaining a B for aquatic ecosystem health is an exciting development, this change in overall basin grade is in part due to unavailability of data for the marine zone, which was awarded a poor grade in the previous three reports.”
“Marine scores will be presented later as part of the broader Great Barrier Reef reporting process.”
“There has been a slight improvement of the estuary zone, near Rockhampton and if the El Nino weather prediction for 2015 come to fruition it is anticipated the estuary could see further improvement in future years,” Mr Johnston said.
“Drought conditions, below average rainfall and reduced river flows influenced the results for many catchments this year.”
“Our best performing catchment was the Nogoa near Emerald, while the Comet was the lowest performing catchment for the year, closely followed by the Callide, which has historically been one of the worst performing catchments, due in part to the abandoned mine in the Dee River sub-catchment.
“One of the concerns from the ongoing drought in the west is decreased long term ground cover in the Nogoa, Comet and Theresa catchments, which means greater potential for sediment run-off into our river systems and out in the reef during future rain events,” he said.
“Our current Report Card ecosystem health grades have been drawn from more than 1.2 million sample results from over 155 sites across the Basin and estuary, and while our independent Science Panel has endorsed these results as the best available scientific data, we are aware of gaps in data in some areas.”
“The Partnership vision is to address these gaps in the future, particularly in areas such as ecology, however relying on third party data provision is our only option until economic conditions improve for all our Partners.”
“We want to acknowledge the ongoing support of our Partners and highlight that these organisations have committed funds and energy to providing a more complete picture of water quality and aquatic ecosystem health in the Fitzroy Basin in what is currently tough economic times for many.
Drinking water results for 2013-14 were also released for Rockhampton and Central Highlands today, with A grades awarded for all townships.
“The results confirm health guidelines were never exceeded, and only minor exceedances of aesthetic guidelines were recorded in most townships at various times during the 2013-14 period related to taste, colour and odour.”
“This is typical of most water supplies in Australia, and aesthetic guidelines relate to the acceptability of water to the consumer, for example appearance, taste and odour, rather than its impact on health.
Central Queenslanders can access the latest information on the three reporting products from the website www.riverhealth.org.au – the new Agricultural Use Reporting Summary; Aquatic Ecosystem Health of local rivers and the estuary; and Drinking Water for Rockhampton and Central Highlands.
The Fitzroy Partnership for River Health, formed in 2012, includes organisations from government, agriculture, resources, industry, research and community and continues its aim of providing a more complete picture of river health in the Fitzroy Basin.