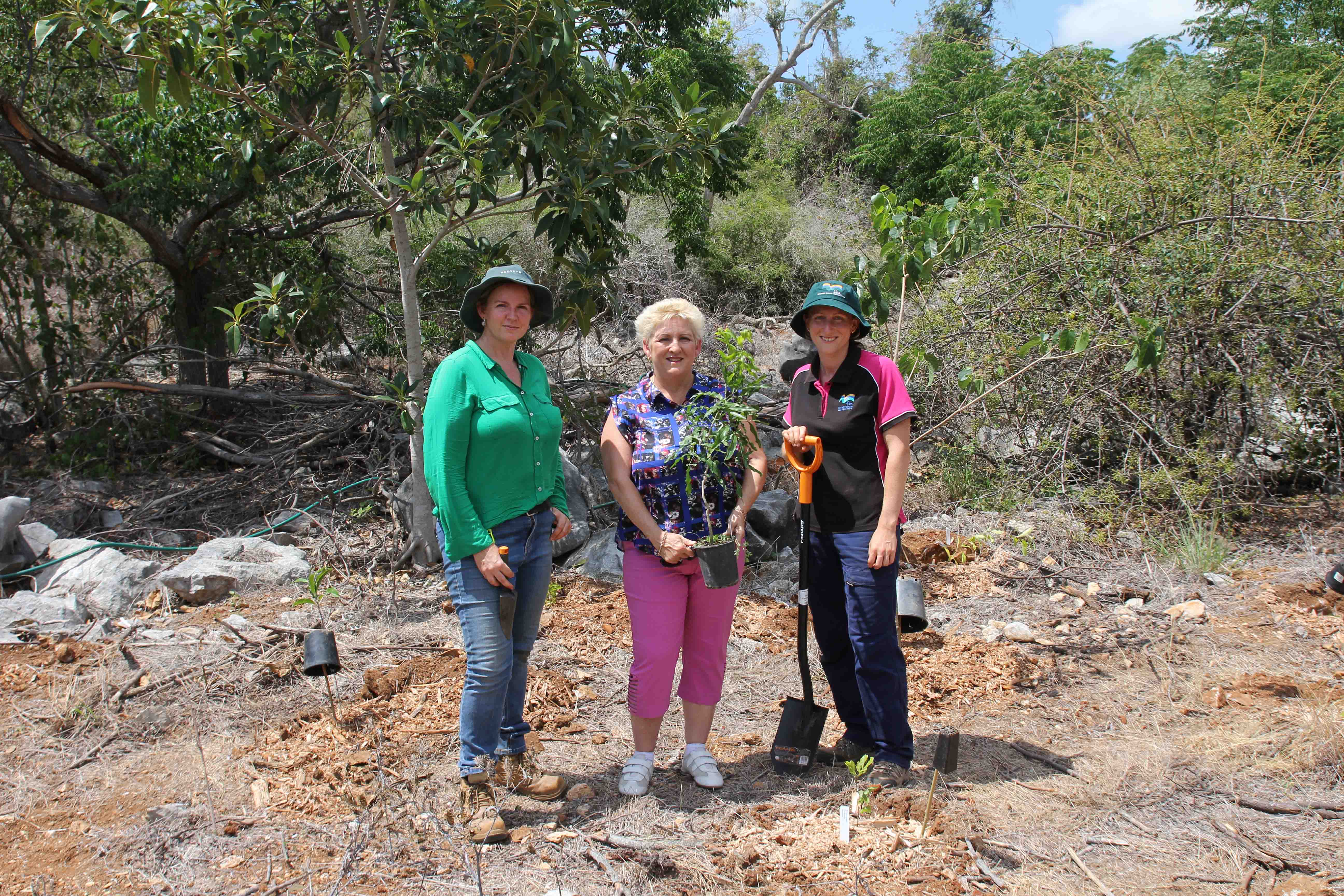 A committed team of 30 volunteers have planted 900 plants through the Australian Government’s 20 Million Trees project at Mt Etna Caves National Park, near Rockhampton this week.
With project teams coming together all around Australia to plant 20 million trees by 2020 to deliver environmental benefits at a local level, the Mt Etna group dug in early to plant and mulch the site to improve the condition and extent of an ecosystem which has been degraded by wildfires and weed invasions.
Federal Member for Capricornia inspected the site and met volunteers over the weekend.
Ms Landry said up to 4,500 trees will be planted over three years to improve the condition of an endangered semi-evergreen vine thicket near Mt Etna – which is home to the famous Capricorn Caves and the little bent-winged bat.
“The aim is to create a green buffer to protect the rare vine thicket from the impacts of wildfire – while providing habitat for local wildlife,” Ms Landry said.
Fitzroy Basin Association Inc. (FBA) Senior Project Officer Cassandra Bouna said a volunteer team had worked throughout the year to collect more than 5,000 seeds from the park for propagation so that plants native to the area could be planted to increase the native habitat.
“We want to acknowledge the work of our great team of volunteers, both on the weekend and in previous work for this project, as the efforts of these people here in CQ and indeed all around Australia are supporting strong local environmental outcomes,” Ms Bouna said.
“These new plants will mean improved connectivity for native species, greater resilience against bushfires and a stronger habitat for threatened species including Mt Etna’s ghost bats and little bent-wing bats, whose breeding grounds are adjacent to the project site,” she said.
The project is supported by FBA though funding from the Australian Government’s National Landcare Programme. The project site is located adjacent to good quality semi-evergreen vine thicket (SEVT)/dry rainforest and this project will increase the extent of the threatened ecosystem.
“The joint efforts of Queensland Parks and Wildlife Service (QPWS), Native Plants Capricornia (NPC), local council and community nurseries, volunteers and school children will ensure this project is a success locally.”
For Rockhampton resident Jodi Liddell her motives as a volunteer showcase a commendable wisdom.
“There isn’t any one reason that I volunteer for community groups – I see them as a fantastic opportunity to meet ‘like-minded’ people in my local community, a chance to get out into our natural environment and to learn new things or see areas that I may not normally see, as well as a chance to get my hands dirty and make a small contribution to conservation in my local area,” Ms Liddell said.
“This is a special area – most Rocky locals are aware this is a spectacular cave system that provides habitat for the vulnerably listed ghost bat but it is also habitat for a number of rare and threatened plants such as a cave fern that isn’t known to occur anywhere else Australia, “ she said.
To find out about ongoing opportunities to volunteer in the 20 Million Trees project over the next 12 months please contact us on (07) 4999 2800 or email Cassandra.Bouna@fba.org.au